Firehole.us is the personal website of  Len Hardy (ljhardy at firehole.us) and is concentrated on planning and trip reports for yearly backcountry trips with a small group of regulars.

Firehole, or “Fire-in-the-hole”, has several meanings, many of which are apropos to this website: 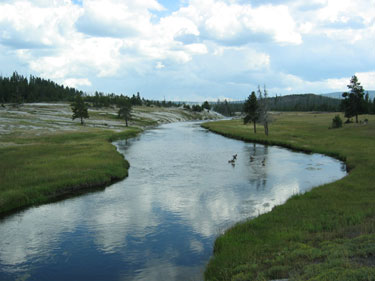 We then made our way to West Yellowstone to check into Big Western Pine, our lodging for our night before the backcountry. It’s always nice to have a good night’s sleep and somewhere dry to pack the night before hitting the backcountry. Thus we booked this room for the night instead of car camping. Our original plan had been to start the backcountry trip today, but due to permit problems we had to back it off until Monday.

We found the Big Western Pine with little trouble. We had rented a small house that was not connected to the hotel. Len went to the lobby and got directions, “it’s a gray house at 1517 Firehole street. Here is a map”. No problem!

After 45 minutes of driving around, walking around, asking people, trying keys in doors of “houses” that were total dumps, we gave up in frustration and went back to the hotel for further instructions. The innkeeper agreed to drive Len to the house, with us following. She pulled right up to a green house at 1516 Firehole, and proudly announced, “see, it’s right here!” Len asked, why is it 1516 and not 1517? “Oh, the city renumbered the streets, totally forgot about that”.

She did not explain why she had told him a green house was gray.

Warning to down trail hikers that an up trail hiker is preparing to let one rip. Sometimes issued belatedly on steep inclines. Quality counts, and a review of the length, moistness and overall stench is generally delivered by the unfortunate down trail hiker.

Stay up to date! Get all the latest & greatest posts delivered straight to your inbox